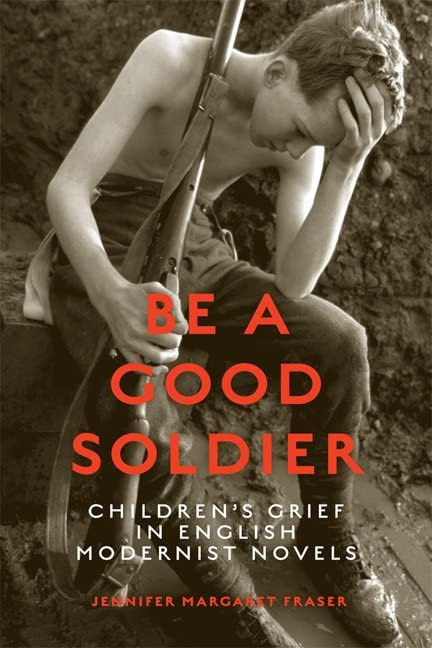 In the modern era, children experiencing grief were encouraged to dry their tears and 'be good soldiers.' How was this phenomenon interrogated and deconstructed in the period's literature? Be a Good Soldier initiates conversation on the figure of the child in modernist novels, investigating the demand for emotional suppression as manifested later in cruelty and aggression in adulthood.

Jennifer Margaret Fraser provides sophisticated close readings of key works by Joseph Conrad, Virginia Woolf, and James Joyce, among others who share striking concerns about the concept of infantry — both as a collection of infants, and as foot soldiers of war. A phenomenon associated traditionally with Freud, Fraser instead uses a unique, Derridean theoretical prism to provide new ways of understanding modernist concerns with power dynamics, knowledge, and meaning. Be a Good Soldier establishes a pioneering, nuanced vocabulary for further historical and cultural inquiries into modernist childhood.

Be a Good Soldier will command excitement and respect for its first-calibre, strikingly original readings of grief and mourning in a truly impressive variety of modernist texts. Jennifer Margaret Fraser's meticulous work of scholarship and criticism crucially stands on its own, blending and cross-considering textual domains with agility and inventiveness. Fraser has generated an exceptionally rich and sensitive repository of vocabulary through which historicist inquiry can now most productively happen.

This paper examines the Nigerian American writer Chris Abani’s novella Song for Night (2007) using Cathy Caruth’s theoretical texts on trauma studies, Unclaimed Experience (1996) and Literature in the Ashes of History (2013) where she develops Freud’s studies on dream works. A close reading of Song for Night brings to mind the questions of how an innocent child becomes a soldier, what he experiences on the battlefield, how he suffers from haunting memories of trauma, and, finally, whether he can recover from post-traumatic stress disorder, and if yes, how he should be treated. These endless questions reflect the difficulty of the studies of a child soldier’s trauma represented in war narratives. To back up the use of Westernoriented theories of Caruth and Freud, I bring in Alcinda Honwana’s text Child Soldiers in Africa (2006) which discusses specific case studies in Angola and Mozambique that helps to understand the necessity of the local level of healing processes to effectively heal the wounded and traumatized African child soldiers. The latter part of this essay will be devoted to presenting how communal healing, listening, and responding to the crying voices resulting from violence are vital in the treatment of African child soldiers.

Click the dots to see what readers are saying about Teaching Bullies.

Dear Readers,
Please jump on Amazon if you have an active account (even if you ordered the book elsewhere) and write a brief review. A single sentence and some stars is enough.
It helps activate the Amazon algorithm and get the science into the hands of those who need it.
Thank you!!

Be A Good Soldier