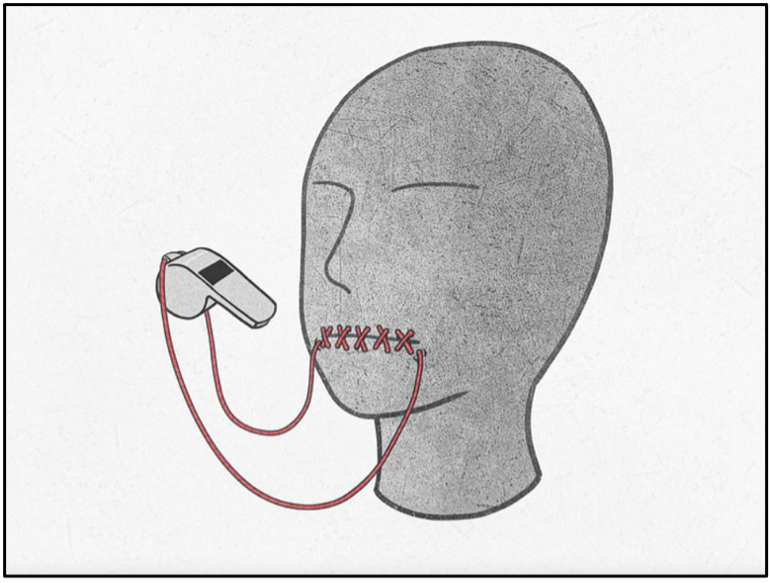 Whistleblowers must take the long road. We tend to imagine being a whistleblower as raising one’s hand and saying “no, that’s not okay,” or sending in a brown envelope with incriminating materials, or being a “deep throat” who exposes corruption to someone who will take action. We expect that in a shocking, revelatory moment that those who have done wrong will be held to account amidst intense public scrutiny and our world will change for the better. Unfortunately, it doesn’t work this way.

In my case, and the case of many others, being a whistleblower means taking the long road and suffering for years at a time.

If your livelihood is jeopardized or outright lost, if you have to go into hiding, if you find yourself in the world of retaliation (all of which are common) then the experience is not at all a triumphant moment where you speak up and see change. It’s way more like surviving a war of attrition.

Dorothy Suskind reports that researchers of whistleblowing overwhelmingly agree on the definition first put forth by Near and Miceli in 1985, whistleblowing is “the disclosure by organization members (former or current) of illegal, immoral, or illegitimate practices under the control of their employers, to persons or organizations that may be able to effect action.” This definition describes my situation perfectly. I can only describe the moment that I realized my employers—the Board and the Headmaster—were not going to stop the illegal and immoral practices of child abuse as disturbing.

But far more disturbing was having to recognize that the whole system from police to government would be powerless to do anything effective to stop child abuse, or were outright going to collude.

All the police officers I ended up dealing with were committed to child protection, but were also hobbled in their attempts to keep kids safe. Where I live, police are not able to criminally charge someone. They have to check in with a government appointed legal team called “Crown Counsel” who decides whether the charge should occur or not. So when we reported to the school’s police liaison officer who the Headmaster had contacted, about the repeated assaults our son had to endure, Crown Counsel dissuaded the police officer from pressing charges.

We were told that if an adult in a bar or in the workplace yelled in an inferior’s face, then when they tried to escape the humiliating verbal attack, grabbed them by the arm and detained them, that would indeed be “assault” which is a criminal charge. But if a teacher did this hundreds of times to a child—our son—then it would be regarded as “motivating.” If this makes your head spin, trust me, it’s only the beginning of what the spin doctors come up with when child abuse is occurring.

It’s why I keep chipping away at our entrenched belief system that enables child abuse while saying it’s not tolerated. Being a whistleblower means taking the long road.

My forthcoming book, The Bullied Brain: Heal Your Scars and Restore Your Health, does not chip away at the bullying and abuse paradigm, it takes a sledgehammer to it. Those who succeed on the whistleblower path have to trust their own strength and believe that they can replace injustice with justice, lies with truth, smear campaigns with public scrutiny, clouding the issue with transparency, hypocrisy with integrity, abuse with compassion, mental illness with brain health. To do this means you have to tap into a great deal of endurance and grit.

I think of it as a marathon where you have to find that part of yourself, that no matter what they throw at you, keeps putting one foot in front of the other until the finish line is crossed.

The finish line for me happens on April 15, 2022 when The Bullied Brain is published, but from the day I spoke up until the publication of that book, my whistleblower’s journey will have been ten years almost to the day. In order to develop the expertise to write The Bullied Brain, I had to put in Malcolm Gladwell’s “ten thousand” lonely hours of practice. Ten thousand hours becoming ten years where oftentimes I was overwhelmed with the hopelessness of my task, burdened by my errors, stressed by my failures, demoralized by having the door slammed in my face, terrified by what the government would do to me when they put me under investigation, riddled with anxiety about my dwindling finances and being blacklisted as a teacher for having spoken up. If I apply to a job, even write educators I know directly, I don’t get the courtesy of a reply let alone an interview and position.

I’m an award-winning teacher who has been published by an American and a Canadian university press, but whistleblowers are not welcome.

When you are an unlikely whistleblower, you have to withstand the misery of being what Malcolm Gladwell calls an “outlier,” but it is exactly this isolated, original position that can lead to transformative change in you and the world. It is exactly the strength and focus of Gladwell’s “ten thousand hours” of intensive practice that can transform you from a whistleblower whose crime is “committing the truth.

Whistleblowers must take the long road.

A whistleblower commits civil disobedience in a corrupt society as Dorothy Suskind explores, and who causes a paradigm shift that makes the change you want to see in the world. The paradigm shift I want to see is children being protected from bullying and abusive adults and abusive adults getting the help they need to heal their brains. I have not come anywhere near to achieving my goal yet, but until my dying breath, I will not give up trying and I pray that the neuroscientific research in The Bullied Brain: Heal Your Scars and Restore Your Health changes peoples’ minds and hearts.